Sometime after I reviewed the Ubiquiti EdgeRouter Lite, Ubiquiti contacted me and offered me a few products to test and review. One of the products they sent me was the UniFi Security Gateway. At the time, I set the box aside as it didn’t have all the features of the EdgeRouter Lite. In January when my father was having trouble with his Internet, I put the USG into service. For that application, it was ideal as it integrated with the rest of the components and was simple to manage.

After the success of that install, I was kind of jealous and decided to purchase a USG and see what it would take to replace my EdgeRouter Lite; the UniFi team has done a lot of work on the controller (the GUI to manage the device) since I was originally sent the device. Replacing a router should not be rocket science. Unfortunately for me, my network is a little bit customized. Going from the EdgeRouter Lite, I had to move over the following:

Some of this is available in the controller, some of it isn’t.

This worked and I started getting somewhere. (After reading some more posts on Ubiquiti’s extremely helpful forum, it appears that an old firmware may have had issues adopting and that upgrading the firmware before adopting may have helped.)

After the USG was adopted into the controller, I plugged in the WAN connection, rebooted the cable modem (so that it would pick up the new MAC address) and was able to connect to the Internet. If I had a simple network, I’d be done, but nothing is ever easy for me.

Next up was setting static DHCP entries. While the current controller doesn’t let you assign DHCP entries until after a device has been seen, all my devices were online and showed up in the controller (I have UniFi switches which makes the controller populate with all devices it sees) using the addresses I had assigned from the EdgeRouter Lite. It was a simple matter of selecting each device, clicking the “Use fixed IP address” checkbox and clicking Apply. (Note there is a bug in the UI where the checkbox doesn’t stay checked even after applying.)

Perfect, so now that was out of the way (tedious, but reasonable), I could move on or so I thought. The controller lets me assign static IP addresses for clients; switches and access points are not considered clients. I needed static IP addresses for the switches and access points so that I could use SNMP monitoring on them; the package I’m using, Observium uses host names to address the devices; in order to use host names, I had to first give devices static IP addresses. This is where the messiness begins. Ubiquiti has an article on how to customize the USG and have the changes persist across reboots. (The EdgeRouter Lite just lets you configure it using the command line and the changes persist.)

You start the process by doing something like this:

At this point, you have to pick through what was dumped and only choose what you entered manually as the json file you create gets merged in with what is produced from the controller. This isn’t necessary if you have a standard config and the controller has all the options you need.

I then repeated this process for IPv6, static DNS entries and my OpenVPN server configuration.

There is a GUI for configuring the firewall and I setup rules that prevent IoT devices from talking to my LAN, my cameras from talking to anything except 1 device, and a few other rules. This was straightforward, but a little different than on the EdgeRouter Lite. 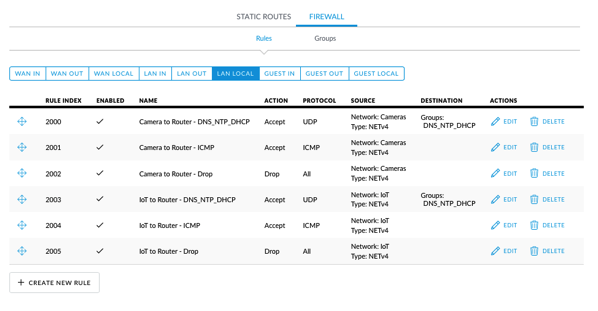 Now that I had the USG setup like my EdgeRouter Lite, what did I get? The hardware is virtually identical, so I didn’t gain performance. The main thing I gained was being able to look at my entire network in 1 place. In addition, I get the ability to remotely manage/monitor my network through the UniFi cloud. Did I mention the pretty picture with the circles?

People are going to ask, why go with a USG over an EdgeRouter Lite. Here’s my rundown:

As I’ve written about in the past, the UniFi line of networking products is easy to use and everything works well together. The USG fits in well and despite my rough start with it, I’m pleased with it. While there wasn’t a huge leap from the EdgeRouter Lite to the USG, being able to see my entire network configuration in one place makes it easier for me to manage. In the future, I plan on adding more firewall rules and possibly more VLANs to separate out more IoT traffic (a day doesn’t go by where you don’t here about some IoT device doing something shady).

If you already own an EdgeRouter Lite, moving to a USG is a tough decision. You gain no new functionality or performance, but an interface that works with other UniFi hardware. If you don’t already own an EdgeRouter Lite and either plan on getting UniFi access points or switches, I think it is a no brainer to get a USG. If you aren’t using other UniFi gear, a USG itself won’t buy you a whole lot. With the USG, I’m able to define VLANs once and have it apply to the WiFi access points and the switch ports; with the EdgeRouter Lite, I had to define VLANs in both places for proper routing.

UniFi employees are quite active on their forums and have posted their roadmap. I really like some of the features and their openness is refreshing. The features won’t really change how I use the device, but will help reduce the number of command line changes I have to make.