Earlier this year I started to have problems with my Internet connection. As most people do, I blamed my cable company. I filed a trouble ticket and a technician came out. He checked the signals, replaced a few connectors and called it good. After he came out, I still experienced blips where I completely lost connectivity for up to 30 seconds. The tech suggested I try replacing my router. As I’ve never had problems with Apple routers (I have a Time Capsule), I basically said “whatever”.

While I still wanted to blame the cable company, I went ahead and order a TP-Link Archer 8 router from Costco.com to give it a whirl. The router was easy to setup and I had it running for a week. After about a week, the web UI stopped responding and required a reboot; support had no idea why and just suggested I reboot the router when it happened. I didn’t like that answer as I like routers to just work, so I returned it to Costco. (Another issue I had with it is that it had an on/off switch; there doesn’t need to be a power switch on a router.) Other than the web UI not responding, it seemed to work well for the week I used it.

I decided to take a stab at another router; this one was a Netgear router that I bought at the Costco store. Configuration was easy (and it did have a power switch which I didn’t like) and it ran for about a day before the 2.4 GHz network stopped responding and required a reboot. This was not good as my son was quite upset that his Squeezebox Radio wouldn’t work when he got up. This router didn’t get a second chance and went right back to Costco.

My luck was kind of running out with routers. I remembered that I had backed the Securifi Almond+ on Kickstarter and I had it sitting on my shelf. I fired it up to use as a router. Setup, like the others, was easy and I was up and running. I went through a few software updates and it performed quite well for well over 2 months. I didn’t, however, take the last few software updates as there were reports of problems with them. I had wanted an integrated automation hub/router, but the automation stuff isn’t up to what I want, yet.

A colleague and I had been discussing routers over this whole time and we were both convinced that the Apple AirPort Extreme/Time Capsule wasn’t the fastest router. (Routers have processors in them and have to make decisions about where each packet goes; the more traffic going through the network and the more devices, the more processing power a router needs.) He had been reading about the Ubiquiti Networks EdgeRouter Lite

and decided to pick one up. The router is less than $100 and is only a router and not a WiFi access point.

I’ve used a Ubiquiti Networks access point in the past and the performance for price was phenomenal. When my colleague got his router and started using it, I got a text that said “Holy cow, this router is fast!”. He’s on a 75 Mbps/75 Mbps FIOS connection. A few days after he got the router, I decided to bite the bullet and get one.

This router is definitely not a router for the average consumer. As I’ve configured Linux networking for almost 20 years, I wasn’t intimidated by the box. The web UI on this is much better than any other web UI I’ve seen for a device like this. It has pretty graphs and the latest firmware uses deep packet inspection (DPI) to show you the bandwidth used by each device and what services the devices are using. Initial setup was a little trickier as I had to upgrade the firmware (new firmware came out the day before I received mine), add a new admin user, figure out which wizard to use, and change a few network settings. This router has 3 ports; it is NOT a switch, so the 3 ports are designed for 3 separate network interfaces. One interface is the WAN (cable modem) while the other 2 are for separate LANs. I configured 1 LAN for my home network and the other LAN for my Ooma; no real reason to separate the Ooma, but I had the port available and I can monitor bandwidth for it separately.

While everything worked fine for my wired network, I had to reconfigure my Time Capsule to simply be a wireless access point which wasn’t hard. 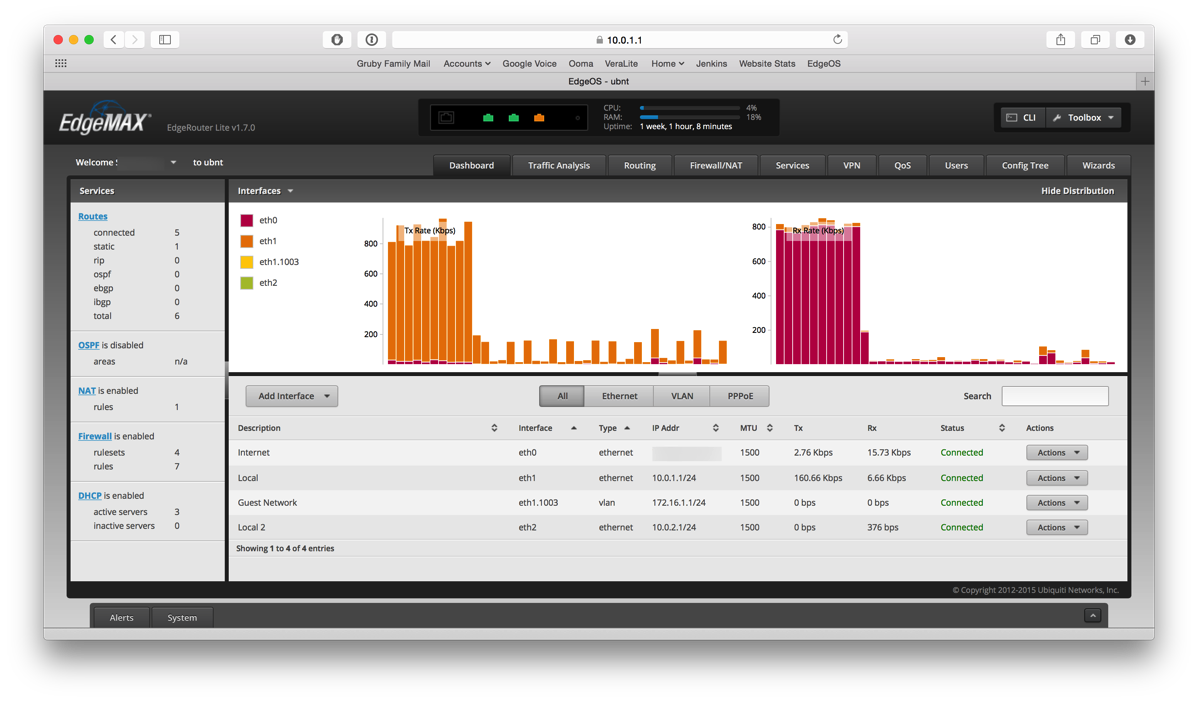 After the setup, I was pleased as punch with the graphs and the performance was quite snappy for accessing web pages. While most people would be done and happy, I wasn’t content! I wanted to get my guest WiFi network working. In a separate post, I’ve written about the experience.

Now my router has been running for 1 week without any hiccups. I’ve done some reconfiguring, but have not had to restart the router. This is NOT common in the consumer routers I’ve touched, but is very much UNIX like where you can bring network interfaces down and then back up. This router has so many options that I’ve only scratched the surface on what it can do. It is definitely a geek’s tool. 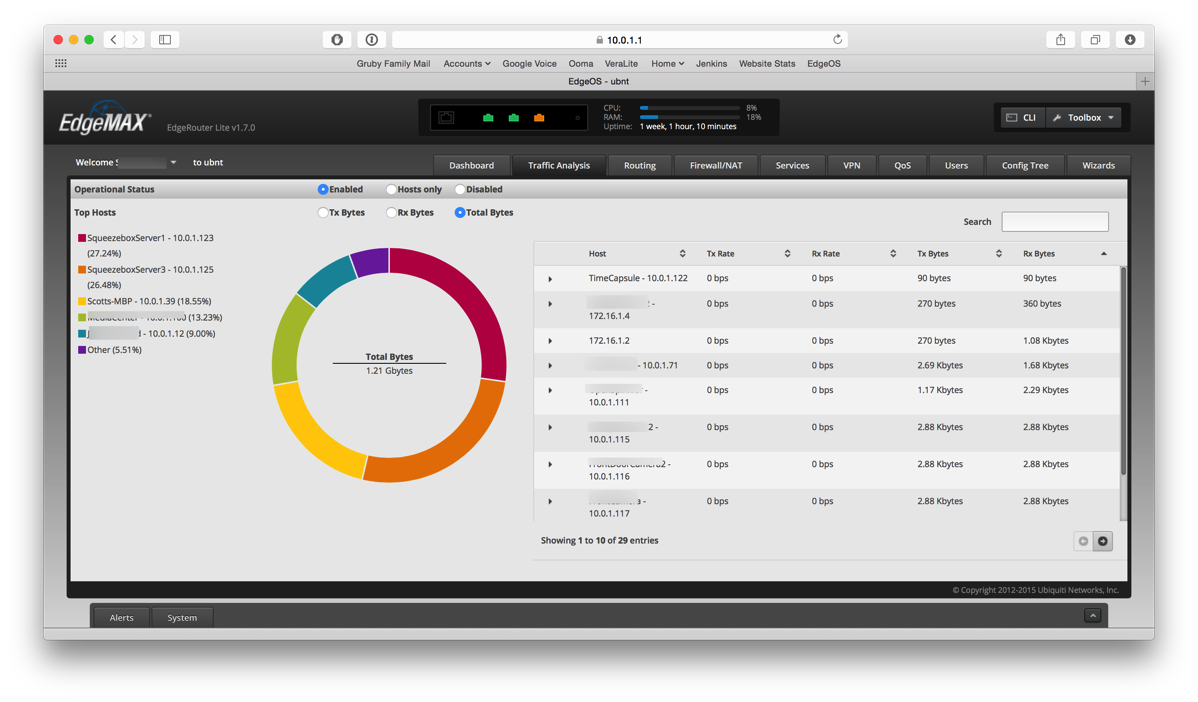 This router is an excellent router for someone that has a networking background and likes to tinker. The configurations are endless and can be tuned to the needs of almost any small setup. It is NOT a consumer router. For my uses, it is excellent and appears to be quite stable. The performance is more than I can ask for on my 50 Mbps/5 Mbps connection and I wish I had more bandwidth to really put this router through its paces.

I am looking forward to the web UI enhanced for IPv6 when that is rolled out. While the router handles IPv6 through the command line, there are only a few pieces in the web UI to support it. If Ubiquiti keeps up with the firmware, I expect to see this in the future.

If you have a really fast connection and feel that your router isn’t snappy, something like this router could be the ticket. However, don’t get this expecting it to be completely plug and play. If you have never used ipfilter or similar firewall tool and don’t know what to do with separate ethernet interfaces named eth0, eth1, and eth2, stay far away from this router.