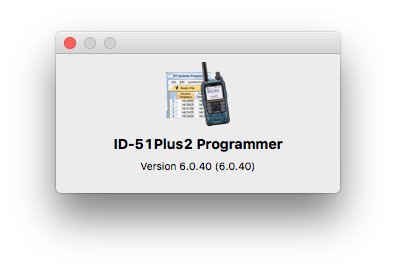 [Update 04/21/17: I did receive an email back from the company on Tuesday wanting to assist me; unfortunately this message went to spam. Their support is definitely responsive and if I implied that they weren’t, I do apologize.]

, I knew that I’d need software to program it as entering information for hundreds of memory locations would be impossible. There were 3 choices; one was expensive from ICOM, a free one (CHIRP) and the one that people seem to rave about from RT Systems. I had read that CHIRP didn’t work properly with the radio, so I went with the one from RT Systems. I bought the Windows version as no Mac version currently exists for it. The software was adequate, but nothing I’d write home about.

, I went with RT System’s new Mac version of the software.

The first thing that I had to get over with the software is that there is a different version for just about every radio. The cost for each radio didn’t bother me ($25 per radio); it was how the software was packaged. I would have expected to purchase one application and then pay a fee to unlock different radios. Instead, the company/author has chosen to do one application for each radio. Having used the software for two different radios, I can sort of see the reasoning as each radio has different options and some just don’t overlap. However, I still believe that having plugins would be a better experience for the user.

The second thing that annoys me a little is that I have to purchase a cable from the company. The IC-7100 is an exception as it has a USB port and the company supports it directly. My ID-51APlus2 came with a USB cable, but it won’t work with the software. I can understand that for radios that don’t come with a cable the company doesn’t want to have to support cables with crappy USB to serial chips, but if the cable comes from the manufacturer, they should support it.

I installed the software last week and was underwhelmed by the experience. The application is a Java application complete with a Java installer. I use a Macintosh for many reasons, among them is that I like the user interface and cross platform user interfaces just look bad. I received the cable last Saturday but didn’t get a chance to play with the software until Monday. I plugged in the cable and tried reading data from the radio, but the software said it couldn’t find the cable. I moved the cable to a different USB port (I tried with a USB-C to USB-A Apple dongle, a USB-C to 4 port USB-A hub, and a USB port on my Thunderbolt Display) with no change. I saw that there was a /dev/tty. port registered and the cable showed up in System Profiler indicating that the driver loaded properly. I sent email to the company and didn’t hear back. Yesterday I called the company and was transferred to Rob in technical support (Rob is also the lead developer; maybe Rob is the R in RT Systems). He wanted to connect to my computer using Team Viewer, but I declined and gave him all the information he needed (in a past life I wrote USB to serial drivers so I know my way around drivers). After a few minutes, Rob said that this particular cable seems to give them problems and he told me to check for updates. I did that and after installing it, the software saw the cable. Excellent! I hung up and let the software finish reading from the radio. Unfortunately the progress bar never moved, but the radio thought it was done. I called again and talked to a different person in support. The woman gathered information, then chatted with Rob and said that they were able to reproduce the problem. She said she’d call back when an update was available. Later that afternoon, I checked for updates and was finally able to read from the radio. (I did receive a callback this morning telling me about the update.)

Now that I was able to actually use the software, I exported memory locations from my IC-7100 (on Windows) in CSV format and imported them into the ID-51APlus2 programmer. Given that the software is made by the same company, I would have expected an easier way to transfer ALL the memory locations (I had to transfer 1 bank at a time) to a new radio. In addition, the software uses non-standard open and save dialog boxes which don’t allow dragging and dropping of files adding some hoops to import the memory banks. I wrote the data to the radio and that worked fine. As I worked on adding memory locations, I realized I wanted to move a bunch of locations to a “memory bank”. Normally I’d expect to be able to select a bunch of locations and change them all at once. Unfortunately that didn’t work and I had to go through roughly 200 memory locations one by one to change the bank.

I am impressed that the software covers lots of settings on the radio, some that I haven’t even discovered yet. This software is functional, but is definitely not a joy to use. Luckily it isn’t a program that is used daily. 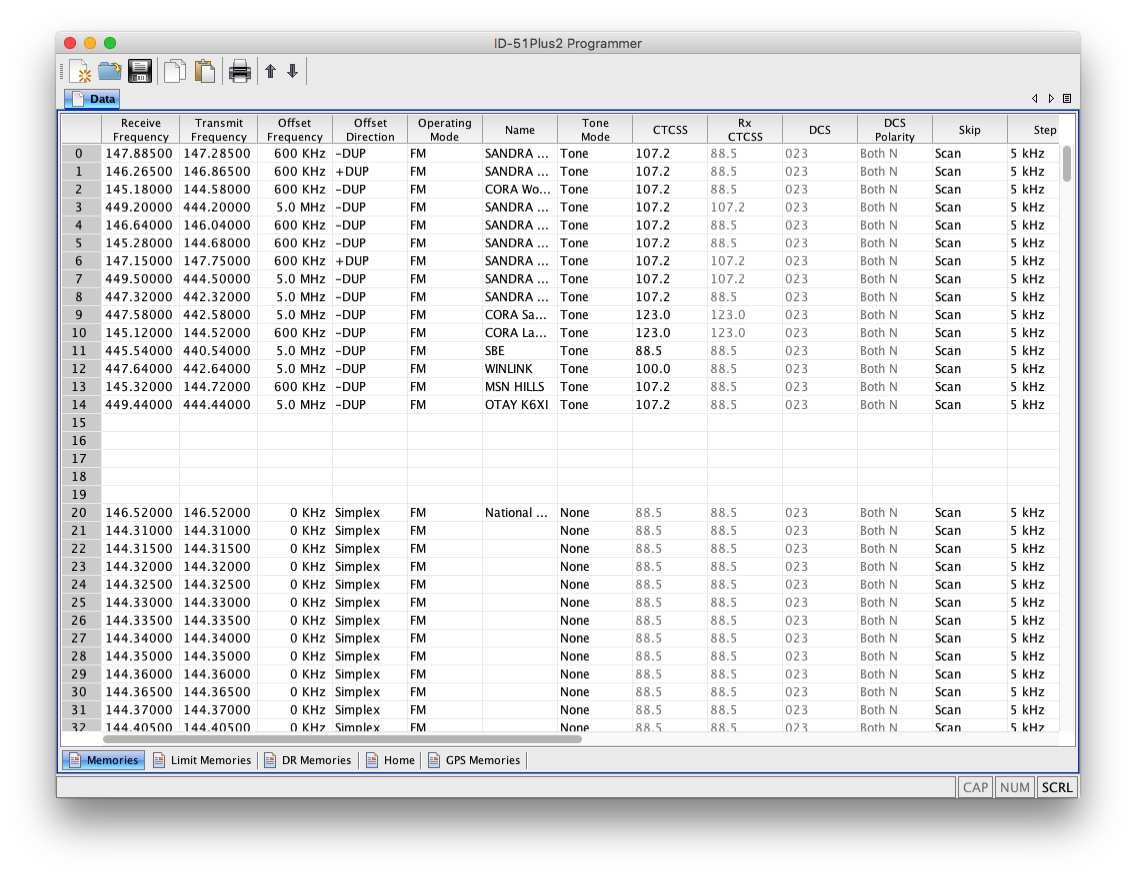 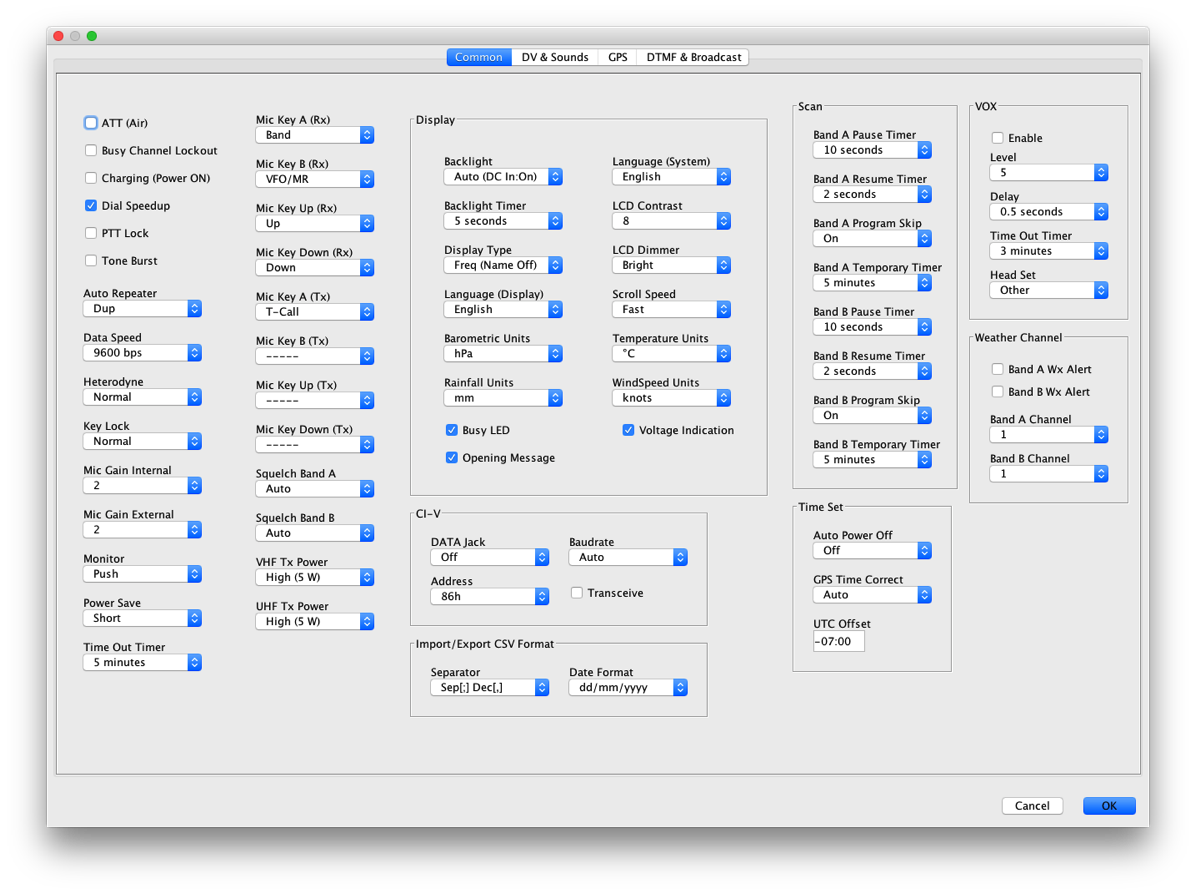 I’m not sure if HAM radio operators are just happy to have any software or if they truly have not used good looking software, but so far I’ve only seen one application that looks like a quality piece of software. The RT Systems programmer for the Mac is barely usable as are most cross platform programs, in my opinion. If the software had cost a little bit more in order to cover the costs of a really polished program, I don’t think I’d hesitate to purchase it. Aether costs $40 and I didn’t hesitate to purchase it because it was heads above the competition in design and usability.

If you’re a Mac user and need to program a radio, CHIRP might work, but you’ll find that the RT Systems software does more. You really don’t have a choice in the matter besides using Windows and then you’d use the Windows version of the software. I understand that the market to sell the software is quite limited and dying off (literally), but I really expect more when I purchase software. I can’t recall an application on my Mac that has a worse user interface.

As much as it pains me to do so, I have to recommend this software as the easiest way to program the ID-51APlus2 radio and probably other HAM radios.

Anyone that knows radio knows that a good antenna is key to success in transmitting and receiving. Once I decided to get a radio, I knew I had to buy a decent antenna and mount it as high as possible. My wife said I could get an antenna as long as it didn’t block her view, so I decided on an antenna that wasn’t too big and might provide me with decent communication. I decided to get a Diamond X50A

antenna which is about five and a half feet tall. After getting the antenna, I temporarily mounted it to a deck we have outside our bedroom on the second floor; I fashioned a mounted out of some plywood and 2x4s such that I sandwiched the railing supports between the wood. I was pretty impressed with myself for coming up with a working solution out of scrap material.

While this worked, I wanted to mount the antenna higher. My options were to put it on the roof or to mount it to the side of the house. As I believe we have a 30′ height restriction where I live (imposed by the city) and I didn’t really want to get on the roof, a roof mount was not my preferred option. I asked my father for some help and we spent about 45 minutes looking at how to mount it and came up with a plan that involved various brackets, drilling into the house, and being up on a ladder (neither of us was keen on the ladder). Once we came downstairs and were looking at the backyard, my dad noticed the dried bamboo I have lying around and starting thinking about how we could use the bamboo as a pole. After a few minutes of discussion, we came up with a plan that involved a trip to Home Depot to get $4 in parts. Yes, our solution involved parts that I already had.

Installation was pretty straightforward as I already had the basic mounting setup. I am pretty pleased with the result and the antenna is performing quite well. Of course mounting it higher would yield better results, but this solution was quite easy, didn’t put any holes in the house or roof and can easily be removed if need be. This mount is also not too noticeable that it would raise concern with my neighbors. 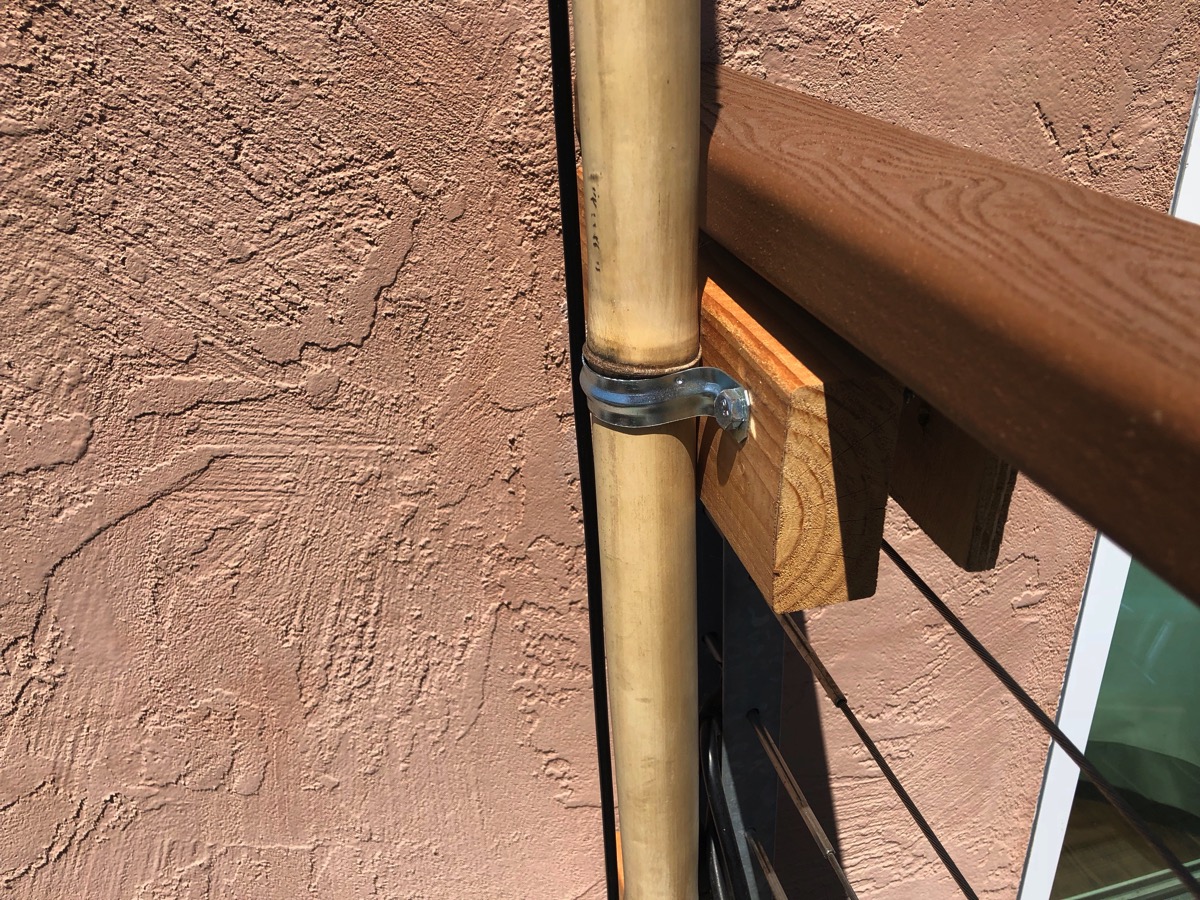 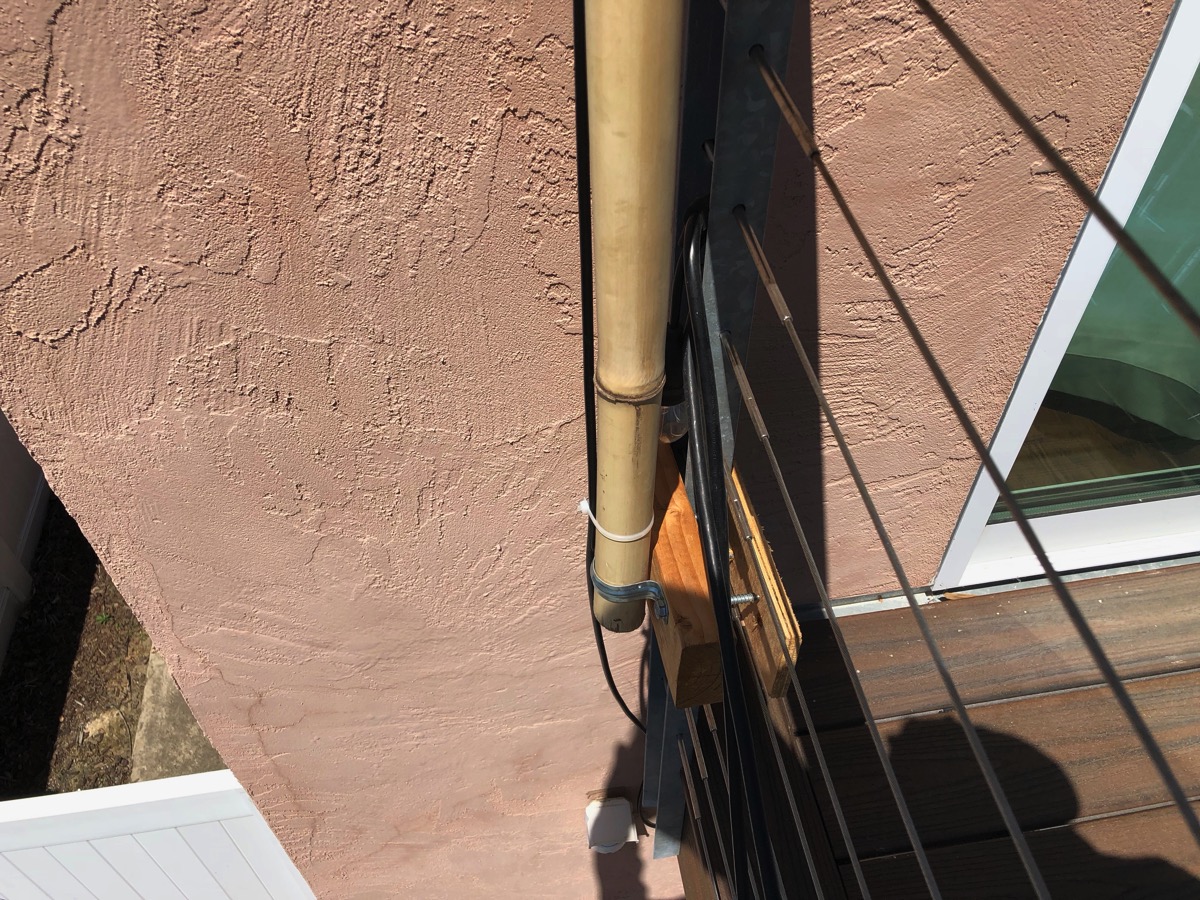 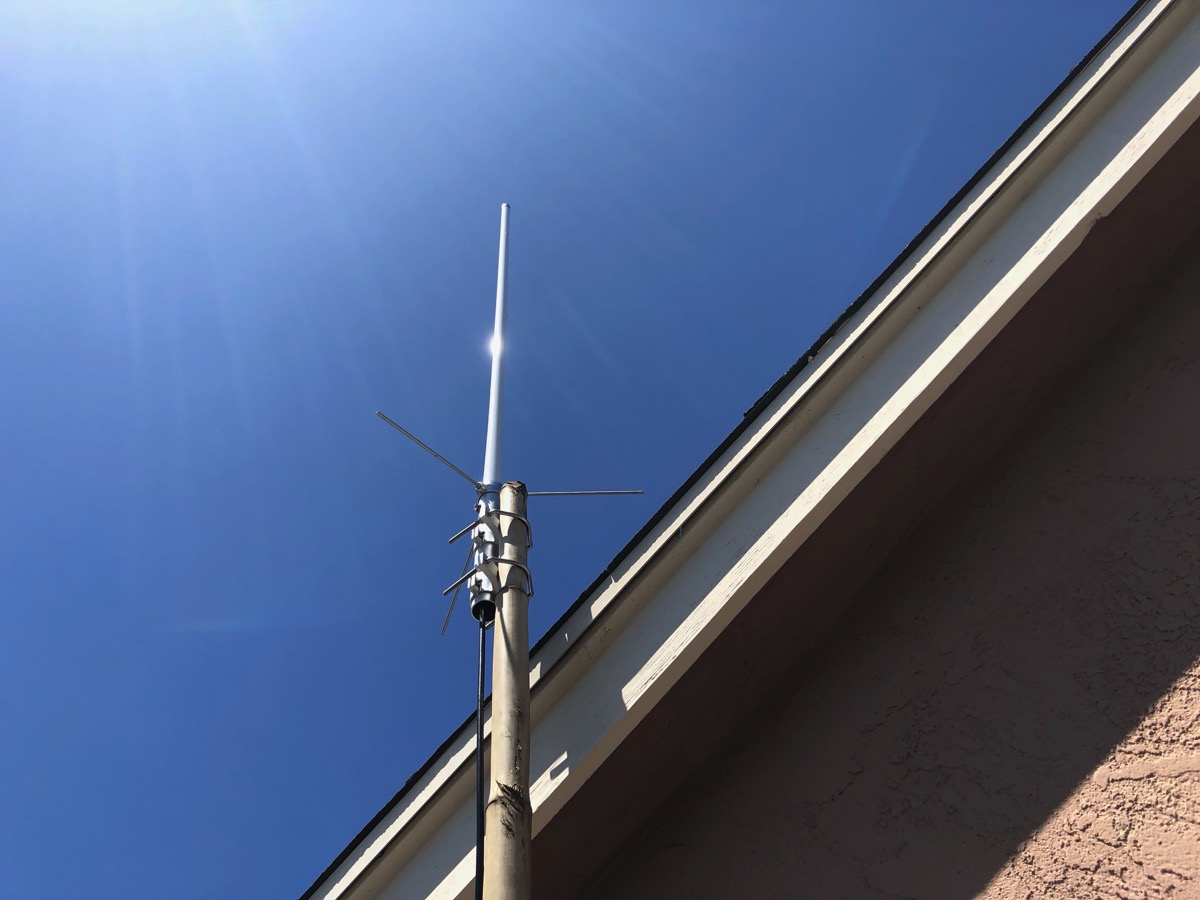 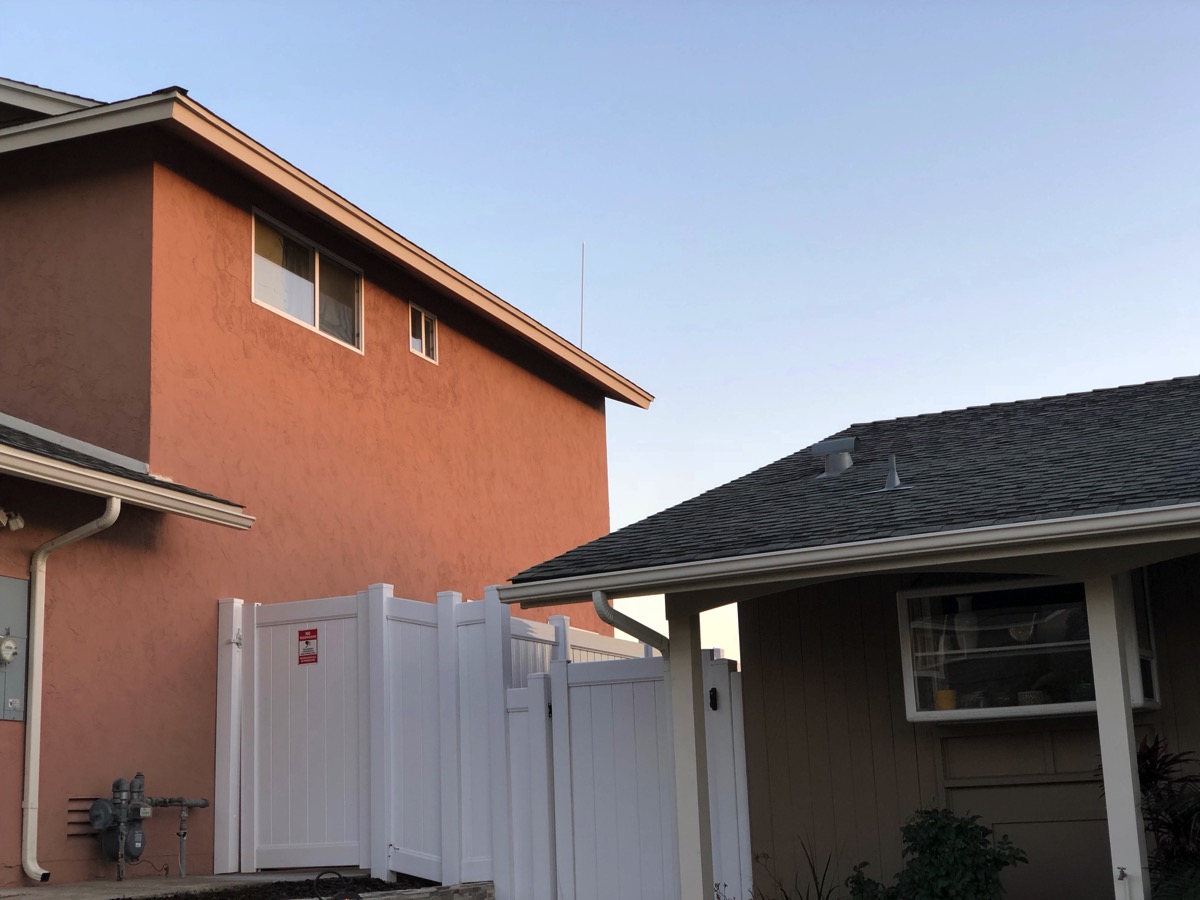