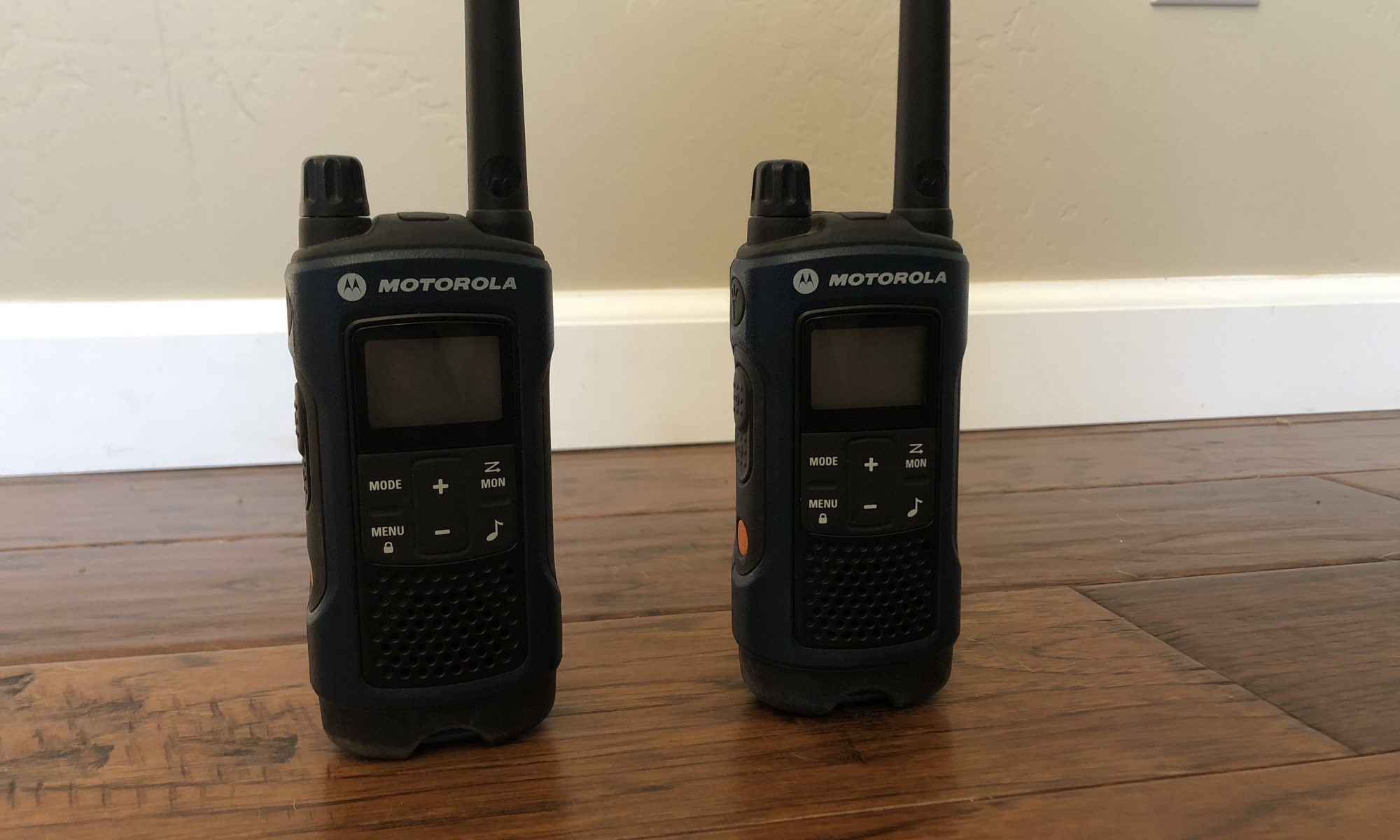 Many years ago I purchased FRS (Family Radio Service) radios commonly called walkie talkies. I chose the Motorola T5000 because it came with 4 radios and the price was right; I know I didn’t spend much time researching them. The radios have served me well over the years. The radios operated on both FRS and GMRS (General Mobile Radio Service) frequencies. Certain frequencies (the radios have specific channels that correspond with frequencies) are FRS only, some are GMRS only and some are available on both. FRS is unlicensed whereas GMRS requires a license. Since I don’t have a GMRS license, I’ve always stuck to the FRS channels. I suspect that many people just picked a channel and used it not realizing that they were violating FCC regulations.

In 2017 the FCC adopted changes to FRS and GMRS which increased the maximum output for FRS radios (from 0.5 W to 2.0 W) and made available certain channels that were GMRS only to FRS users. They basically acknowledged that people were using the FRS/GMRS radios with no regard to which channels were being used.

The rechargeable batteries on the Motorola T5000 radios I owned had long died and with my push to have all my devices rechargeable via USB, I decided this past spring to replace the radios. The radios also had a maximum output of 0.48 W on the GMRS channels (now available for FRS) which meant that the range of the radios was quite limited.

I liked the styling of the newer Motorola Talkabout radios, so I picked up a pair of Talkabout T260 radios. I used the radios on a Scout trip and they worked quite well, but there was a place that I lost contact with another leader that was at the front of the hiking group. We also used the radios on a cruise ship and they worked pretty well across several decks even with all the steel that blocks signals. Even though the radios performed decently, I decided to do some more research on the radios. The radios are advertised with a 22 mile range; that, of course, is in ideal conditions and never happens. The manual has a chart of channels and shows the maximum output power on the different frequencies. This is quite misleading as I soon discovered. All FCC registered devices have information available on the FCC’s website including test reports showing the actual power output. Doing a search of the FCC ID AZ489FT4929, I discovered that the maximum output of the radio was 0.8 W which is far lower than the legal maximum.

After more research, I found the older manual for the radio and it appears that Motorola changed a few pieces when the new FCC regulations took effect including the chart; the old chart showed which channels were FRS and which were GMRS. The new chart was basically a waste because all the channels could be used by all users; some of the channels would have higher output. Motorola did respond to my claim that the manual was misleading by saying that the chart in the manual wasn’t there to indicate how much power the radios actually put out, but to show that it complied with the FCC maximum.

This newfound knowledge kind of bummed me out, so I went back to the drawing board and went through all the Motorola Talkabout radios (I like the design of the radios over other brands) and looked up the FCC ID of each one looking for the radios that had the highest output power (up to the legal limit). If my information is correct, the Motorola Talkabout T460 which has an FCC ID of AZ489FT4924 has a maximum output power twice that of the T260 (1.7 W). While I don’t expect to ever get the 35 mile range advertised with these radios, I at least could have radios with the highest power available.

I purchased a pair of the T460 radios and have now used the radios on a couple of trips and they are far superior to the T260 (and the old T5000 ones I had before). (While I did purchase these radios, Motorola generously sent me another pair of the T460 radios in response to my letter to them about the T260 manual). Specifically the T460 has an analog control for the volume making it easier to turn the units on/off and control the volume. They also have a feature called VibraCall which vibrates the radio the first time it receives a transmission if it hasn’t received a transmission in a certain period of time; this is handy if the volume is turned down or you happen to not be paying attention. Once the radio vibrates, you can ask the other end to repeat the message. The radios also have a weather radio, different call tones, and a few other features that are generally not of much use to me.

If you’re looking for relatively low-cost, unlicensed FRS radios, I think the Motorola Talkabout T460 are hard to beat. They have a decent range and a number of features that make them easy to use. Time, of course, will tell how durable they are and how good the range is in a variety of environments.