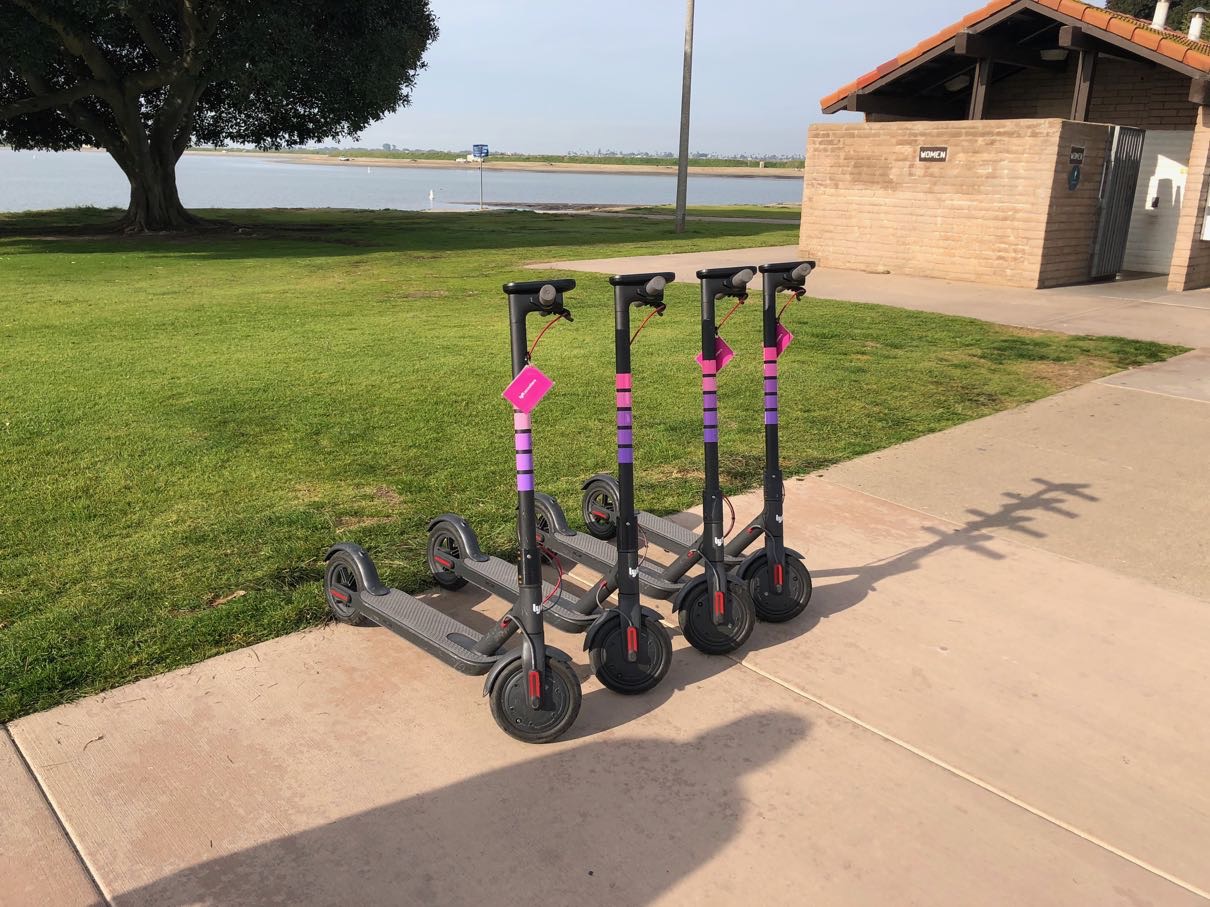 I try to get out and run 3-4 times a week down by Mission Bay as there is a nice path and I don’t have to be afraid of vehicle traffic. I used to run on the sidewalk where there was one and on dirt when there wasn’t; however with traffic whizzing by at 55 mph (speed limit is 45 mph), I got smart and decided that I’d just drive to a nice place and run. Last year on one of my runs, I noticed electric scooters parked in groups along the path. Over the course of the next few months, the scooters started appearing just about everywhere I went in the city.

The scooters are an interesting solution to the last mile problem and appear to be useful for a lot of people. However, the companies that are running the scooters have taken the approach that they’ll just “disrupt” transportation and simply do what they want and deal with the fallout and laws later. This has been a big topic on the news with injuries happening all the time, lawsuits (currently San Diego is facing a lawsuit about disabled access on the sidewalks), and some riders disobeying laws.

In my view, there are a number of issues that I’ve seen:

The scooters, themselves, aren’t the problem in my opinion. It is the riders (mostly) that don’t know what they are supposed to do or frankly don’t care.

This is already illegal under California Vehicle Code 21235:

While people may argue what is an adequate path, unless the sidewalk is really wide, a scooter on the sidewalk won’t allow 2 people to pass one another comfortably.

Scooters ridden on the sidewalk

This is already illegal under CVC 21235:

(g) Operate a motorized scooter upon a sidewalk, except as may be necessary to enter or leave adjacent property.

If we consider the path around Mission Bay a bike path and not a sidewalk (scooters can be ridden on bike paths), San Diego Municipal Code §63.20.7 states:

Driving Vehicles On Beach Prohibited; Exceptions; Speed Limit On Beach
(a) Except as permitted by the Director and except as specifically permitted on Fiesta Island in Mission Bay, no person may drive or cause to be driven any motor vehicle as defined in the California Vehicle Code on any beach, any sidewalk or turf adjacent thereto; provided, however, that motor vehicles which are being actively used for the launching or beaching of a boat may be operated across a beach area designated as a boat launch zone. Original

A scooter is defined as a motor vehicle under California Vehicle Code and the path around Mission Bay is adjacent to a beach thereby making it illegal to ride a scooter on the path.

Notwithstanding any other provision of law, a motorized scooter may be operated on a bicycle path or trail or bikeway, unless the local authority or the governing body of a local agency having jurisdiction over that path, trail, or bikeway prohibits that operation by ordinance.

Meaning that San Diego (as they have done) can regulate scooters on bike paths.

As scooter riders must have a driver’s license (or permit) and scooter are classified as motor vehicles, the riders must follow all the rules of the road including which direction they ride on the street, stopping at stop signs or traffic lights, yielding, etc. This is already covered under California Vehicle Code.

Parent and child riding on a scooter

(e) Operate a motorized scooter with any passengers in addition to the operator.

(c) Operate a motorized scooter without wearing a properly fitted and fastened bicycle helmet that meets the standards described in Section 21212, if the operator is under 18 years of age.

(d) Operate a motorized scooter without a valid driver’s license or instruction permit.

As I wrote in the beginning, I don’t have a problem with the scooters if they are operated in a safe and respectful manner (just like driving). I do, however, have a major problem with scooters blocking the sidewalk when parked and riders zipping by me when I’m walking on the sidewalk. In addition, driving is already dangerous enough without having to take into account a scooter rider on the road not obeying the law.

Instead of trying to add more regulations for scooters, how about the city enforce the current laws on the books? This would go a long way at solving the problems. The companies that operate the scooters could possibly do more to make their riders understand how to properly operate them. As much as I’d like to blame these companies, it is the riders that are causing the problems. The companies, however, need to stage their scooters in appropriate locations to not block sidewalks and need to pick them up in a reasonable amount of time as they look like trash scattered all over.

I am not a lawyer and this is not legal advice. This article is based on my interpretation of the laws.