I’ve been so pleased with Home Assistant that I decided to see if I could migrate completely away from Vera and run all my Z-Wave devices on Home Assistant. Currently Home Assistant uses OpenZwave as the base and has basic support for a lot of Z-Wave devices. While OpenZwave isn’t as mature as Vera in its implementation, I found that with the exception of 4 Leviton VRCZ4-M0Z zone controllers, everything worked well. I’ve read that some people have had problems with Z-Wave on Home Assistant, but so far things have been going quite well for me using an Aeotec Z-Stick Gen5 as the controller. I suspect that my success is due to the type of devices I have (only outlets, switches, 1 light bulb, 2 portable MiniMote controllers and these VRCZ4s); I don’t have any sensors and only 2 of my devices are battery powered.

In order to complete my transition away from Vera, I had to get the 4 VRCZ4s to work. A Google search turned up very little information on how to do this with the exception of one post that gave me some clues. The post uses a third party piece of software that I don’t have to program the controllers, so that was pretty much out. However, the post did talk about the SCENE_CONTROLLER_CONF Z-Wave command class. With this information in hand, I decided to see if I could program my controllers.

Here’s what I eventually did.

The programming has now been done, so the next step is to use the new commands in Home Assistant. I use Node-RED and have setup a sequence that handles all of my controllers. 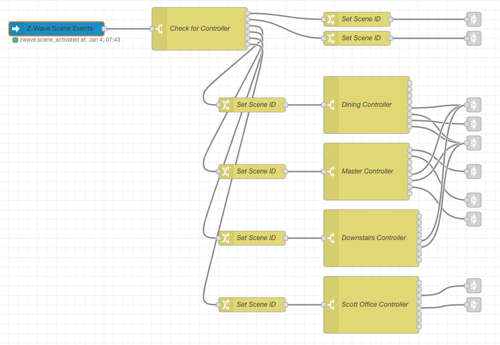 1. Drag an events node (top left in Home Assistant) to the workspace and set it up to only look at zwave.scene_activated events. 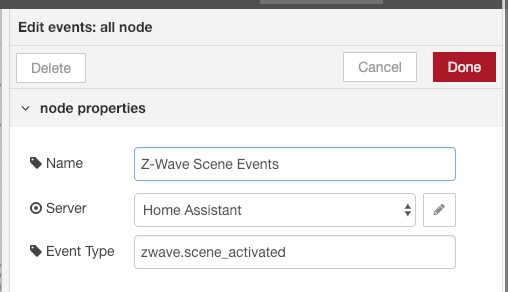 2. Use a switch node to differentiate between the controllers. 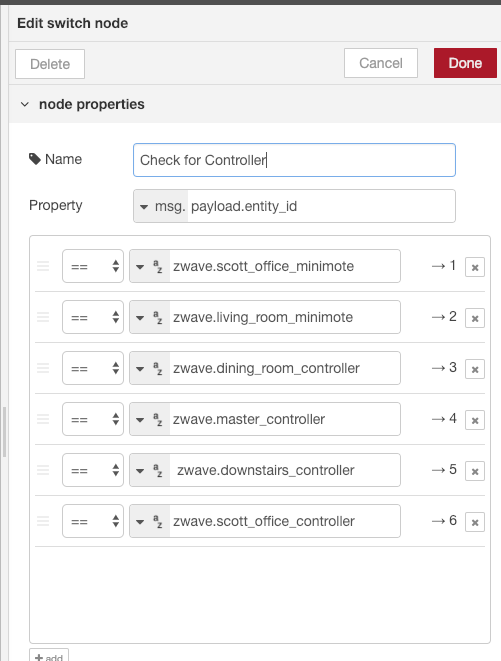 3. Use a change node to extract the scene ID. 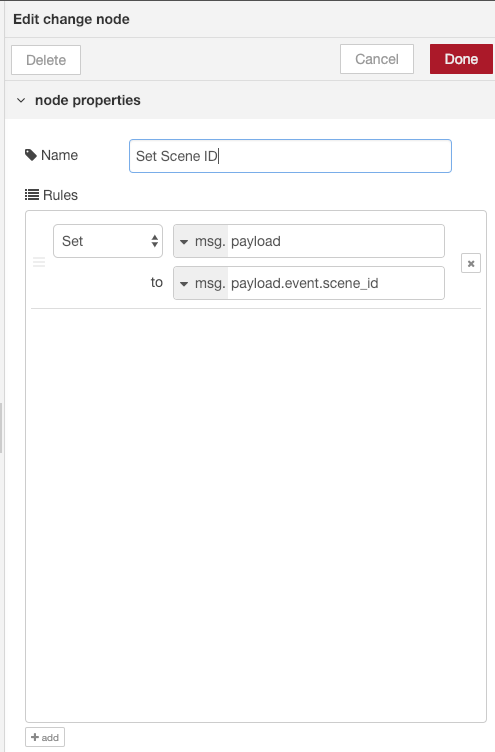 4. Next use a switch node to separate out the scenes. If you didn’t follow my scene numbering, you will have to enter whatever scene IDs you used.

5. Connect up nodes for each scene.

While this seems like a lot of work, I probably took longer for me to write this up then to actually configure a controller! I’m not an expert in Home Assistant, Node-RED or Z-Wave so send feedback if you have any.